Capturing the soul of this period in history was my objective through studying the architect and the interior designs so I thought I shall start with exploring the Islamic art that started with the evolution of the Islamic state. I found that the best place that I shall start my journey with is the Museum of Islamic Art which lies in Bab el Khalq in the heart of Cairo.

To get there I parked my car in el opera parking lot which was the building that used to be the opera house one day which lies by the beautiful statue of Ibrahim Pasha which is the son of Muhammad Ali who used to govern Egypt in the early 19th century and is known to be the founder of modern Egypt. This is the only statue of Mohamed Ali's family that was left and wasn't removed after the 1952 revolution. I think the only reason it was left and wasn't removed is that Ibrahim Pasha was very well known to be a brilliant militant who could expand the Ottoman Empire to reach parts of south Europe before he was defeated by the British and the French army.

I walked through Attaba square and then through Mohamed Ali Street which was well known to be the center of music throughout the past two centuries. It still has many stores which sell musical instruments but it has been changed to be an open market for different stuff. By the end of Mohamed Ali street on the left, you are going to find a building that you can't miss as it is built in an authentic Islamic architect style, this is the building of the Museum of Islamic Art but you are going to find its entrance from Bab el Khalq square right in front of the directorate of Cairo assembly (moderyat amn el kahira).

At the entrance; I was hosted first by the museum staff that was very friendly and asked me to stand in front of the camera which I thought was for security reasons but then I discovered that this camera is to measure the temperature for all the visitors. Then they direct me to buy the ticket and then through the entrance gates. The Museum of Islamic Art consists of very high ceiled halls; each of the halls has a collection derived from a specific era in the Islamic history in Egypt starting from the Umayyads , Abbassid , Fatimids , Ayyubids , Mamluks , and finally the ottoman which is considered the last Islamic state. I was surprised by the beauty of the place from the inside and how well organized it is. Every piece is placed in a glass box and is lightened in a way that suits the historical value and the hard work done on every piece. I am sure every piece has taken a very long time of very hard work to be done by hand in such a precise and artistic look. I am sure every piece in the Museum of Islamic Art has a long story and was a witness to many events; I will try to explain every piece and tell the story surrounding every piece as much as I can.

As soon as you passed the entrance, you will find a hall in the back end of the middle of the hall your eye won't miss this beautiful door which is made of wood and have inlaid brass pieces, while on the left of the door there is the key of el Kaaba and an instrument used anciently to determine the direction of Qibla which is the direction where every Muslim use in the time of the five daily prayers. This instrument is from the Ottoman era 12th AH/ 18th AD century and can be considered an early invention of the modern compass. It is made of wood in the time of Sultan Mahmoud I and is signed by its maker "Barun al-Mukhtar" and is dated 1151 AH 1739-1738 AD and have various drawings of el Kaaba and a drawing of the upper half of Earth till the equator, and have writing in Ottoman languages ended by a phrase saying "It occurred in the town of Constantinople, may God preserve him from pests and calamities, in the year one hundred and fifty-one and a thousand". 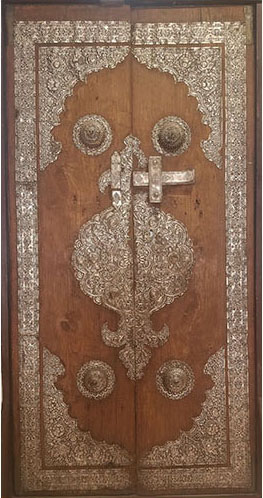 The key of el Kaaba is from the Mamluk era specifically from the 8th AH/ 14th AD century and is made of brass and was silver plated.it is made in a very artistic look as it includes prominent written Arabic text on every side of its four sides. The written text includes parts of the holy Quran and Allah calligraphy is written in different styles. It belongs to the Mamluk Sultan al-Ashraf Sha'ban. It is considered to be the oldest existing specimen ever seen for keys of Kaaba. Verses of the Quran are inscribed on the key from Surat al-Fath, as well as the names titles of Sultan al-Ashraf Sha'ban. It is attributed to 765 AH/ 1363-1364 AD.

One of the things which are worth saying is that my grandparents used to tell me about the gigantic ceremony of sending the covering of el Kaaba from Cairo every year. It seems that the covering of el Kaaba used to be sent every year from Egypt in the hajj time after being made and ornamented with gold as they used to tell me. I hoped that I can find any of them at the Museum of Islamic Art but it seems that it was all kept in Saudi Arabia which used to be called at that time "Billad el Hijaz".

The next box in the Museum of Islamic Art includes three modern instruments from three different historical eras. The first one is a small model for a planetarium which was used for educational purposes to teach students about the planets. It is made of copper alloy by Dia el din Muhammad 11th AH / 17th AD century. The second one is a compass which was also made from a copper alloy and was made in Iran-Safavid which is a dynastic family that ruled over modern-day Iran. They sustained one of the longest-running empires of Iranian history, lasting from 1501 to 1736 AD. And the last one in this box is an astrolabe which is an instrument used to make astronomical measurements, typically of the altitudes of celestial bodies, and in navigation for calculating latitude, before the development of the sextant. This piece is dated according to the museum to the 9th Ah/ 15th AD. It is also made of copper alloy and inlaid with gold and silver, bearing the name of Sultan Bayezid who was Ottoman Sultan from 1389 to 1402 AD. Sultan Bayezid is a well-known figure in history due to his efforts to unify Anatolia which is the historical name given to the region that lies in western Asia and is also called Asia Minor. Bayezid was also able to capture Thrace (the name given to southeast Europe area including Bulgaria, Greece, and Turkey) except Constantinople, Macedonia, Bulgaria, and parts of Serbia in Europe. Bayezid was defeated later by Timūr Gurkānī in the fateful battle of Ankara 1402 AD. Bayezid was captured and was humiliated by Timur which has become a legend in which so many historians and novelists wrote about the humiliation and suffering he endured during his captivity.

Now we are going to talk about an item which has a really valuable position in the heart of every inhabitant of this part of the world. It's the Meshka which is used to lighten almost every mosque in the region. Mostly it was made of glass but the shape was also used to make different lighting in different materials including brass. The Meshka was also mentioned in the Holy Quran in Surat 'al nor' in which God made a metaphorical image of himself as the light which attracts the kind-hearted people who are also described by god in the same verse as a light to all the surroundings. The manufacturing of the Meshka flourished especially in the Mamluk Era to the extent that it was used to be exported to Venice. Most of the Meshka that was discovered from this era was ornamented with the verse from Holy Quran which has this verse including mentioning the meshka in plural from Surat 'al nor'. The Manufacturing of the meshka was unfortunately declined especially after the Portuguese discovered the Cape of Good Hope route instead of passing through Egypt to deliver products from Asia to Europe and vice versa, through which Egypt has lost a very important source of income. At that time the Meshkah industry flourished in Venice that it was said that was transformed from an importer of Meshkah to an exporter of it. Most of them also include the name of the manufacturer and the ruler of this period. These historical Meshkas are mostly found now in the museum of Islamic Art in Cairo and the Metropolitan Museum in New York City.

The first Meshka that I found during my tour in the museum of Islamic Art which lies in the entrance hall was made in the 9th AH/ 15th AD century and is signed by the name of the mamluk prince Safy al-Din Shaykhu. It is made of enameled glass and is engraved with the Quran verse mentioned before from Surat 'al nor' and is written in el Naskh calligraphy. During my research, I found the same meshka attributed to the same prince in the Metropolitan Museum in NYC collection which carries the same drawings and calligraphy and also carried the same verse of Surat el nor and was dated between 1349-55 AD.

Amir Safy al-Din Shaykhu was a prominent leader in the Mamluk sultan Hassan era and has built a mosque and khanqah which is a building designed specifically for gathering Sufi brotherhood. Sufi is a Muslim ideology that is characterized mainly by its inclination to avoid the materialistic nature of the world and try to fuse with god's soul. The reputation of the khanqah which only included a school; grew across the region and many notable persons of learning from the era graduated from there. Sadly, Shaykhu who was very well respected and admired by the people in Egypt at that time was assassinated while he was sitting at the House of Justice. This caused a lot of turmoil in the Citadel causing many other people to be killed in the incident. Shaykhu didn't die instantly but he died later exactly on Friday 1357 AD and was buried in his khanqah. 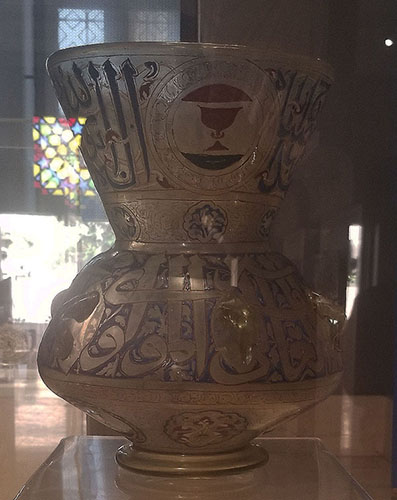 I think that is enough for the first part of my journey through history in which I am trying to give soul to the items in the Museum of Islamic Art by telling a brief story about every item which I think can help in understanding the real historical and artistic value of every piece, hope that I have done that and I would appreciate it if you can leave a comment either negative or positive and would be a help if you can share it which can tell that it added value to you and helped you understand more about the real rich history of this region. I would like also to clarify that this is only the first part in which I only covered a real small part of the Museum of Islamic Art in Cairo and soon I will be working on the next part.

© ArabiaCraft store All rights are reserved